Ethereum is a decentralized network of nodes that communicate via peer-to-peer connections. These connections are formed by computers running Ethereum's specialized client software: 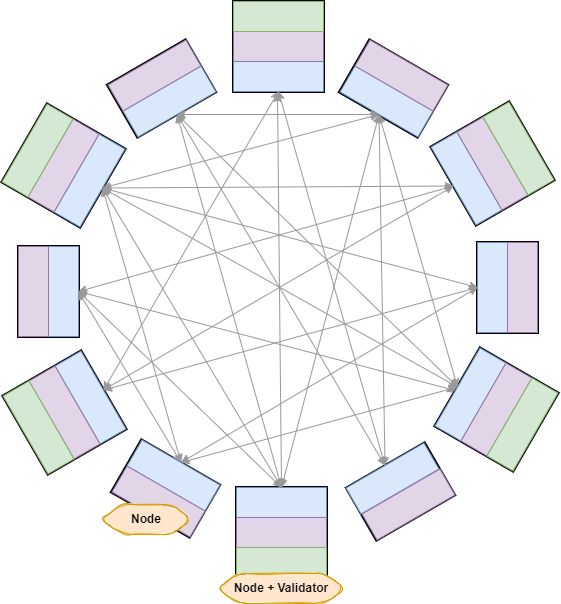 An Ethereum node is a running instance of Ethereum's client software. This software is responsible for running the Ethereum blockchain.

There are two primary types of nodes in Ethereum: execution nodes and beacon nodes. Colloquially, a "node" refers to an execution node and beacon node working together. Nodes establish connections with other nodes running on other computers, forming a decentralized peer-to-peer network that processes Ethereum blocks and transactions.

When users stake 32 ETH to participate in Ethereum's proof-of-stake consensus mechanism, they use a separate piece of software called a validator client, which connects to their Prysm beacon node. This is special piece of software that manages validator keys and duties such as producing new blocks and voting on others' proposed blocks. Validator clients connect to the Ethereum network through beacon nodes, which depend on execution nodes:

The Ethereum network that hosts real-world applications is referred to as Ethereum Mainnet. Ethereum Mainnet is the live, production instance of Ethereum that mints and manages real Ethereum (ETH) and holds real monetary value.

There are other live, test instances of Ethereum that mint and manage test Ethereum. Each test network is compatible with (and only with) its own type of test ETH. These test networks let developers, node runners, and validators test new functionality before using real ETH on Mainnet. 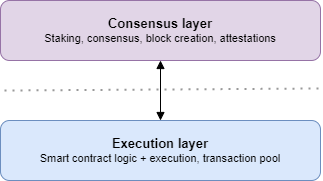 Every network's execution layer works with (and only with) its corresponding "partner" consensus layer. EL-CL network pairs work together to run Ethereum proof-of-stake.

What happened to miners?
Mining is a proof-of-work consensus mechanism. Ethereum's consensus is now driven by a proof-of-stake mechanism, which replaces miners with validators.

Where do slashers come into play?
Slashers, like validators, use specialized pieces of consensus-layer client software to fulfill a critical responsibility for the Ethereum network. Slashers attempt to detect and punish malicious validators. Learn more by reading our Slasher documentation.

How do I get testnet ETH?
We recommend using Paradigm's MultiFaucet. If that doesn't work, you can ask the community for testnet ETH on either the Prysm Discord server or on r/ethstaker.