Overview of the Feature#

What the feature is for:

Where the feature lives in Prysm: The feature is fully contained within the following folder/package: /beacon-chain/sync/initial-sync/

What problems are being addressed:

The challenges for the initial sync implementers can be summarized as the following;

High Level Design of the Solution#

Essentially synchronization is split into two phases: from the state at which the node is started to the finalized checkpoint (as reported by majority of peers) and, then, if necessary, from that finalized checkpoint till the best known state (we have a minimum number of peers that are expected to support that state, before considering synchronization toward that head).

Both described phases utilize the very same synchronization mechanism: queue of blocks, which guarantees that incoming blocks will be in sequential order, block processors will never starve (the queue will always have some blocks waiting), and that with acceptable amount of redundant requests queue avoids livelocks by providing blocks that are capable of advancing the state.

To keep track of the state, the queue utilizes finite state machines (FSMs): blocks are requested in batches, with each batch range of blocks assigned to one of available state machines, and within queue there’s a ticker that is constantly checking the state of each individual machine allowing them to apply actions to deterministically transit into the next state:

(here E - is normally a tick event, and actions are selected from available event handlers depending on the initial state S).

FSMs are responsible for managing state transitions (fetch request queued, block batch requested, blocks received, data processed etc), but the actual fetching of data is handled by another major component of the init-sync system: block fetcher. This is done to decouple block queuing and actual block fetching: different state machines request different ranges concurrently. Of course, this may end up in some redundancy (when the earliest machine’s blocks are on some wrong fork and the next FSMs cannot proceed without resetting and re-requesting data of that first machine). 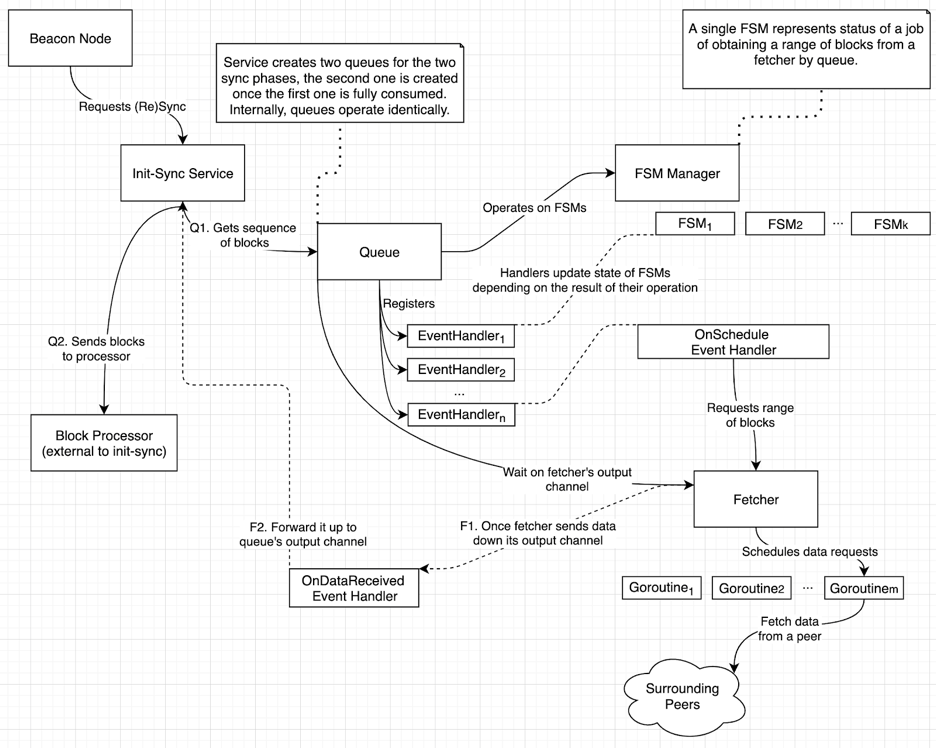 Structure of the feature (is it a service, a tool, a background routine?)

Initial synchronization is implemented as a separate service, loadable into service registry.

Components of the feature

Available synchronization functionality is exposed via initalsync.Service, with two major methods: Start() and Resync(). The former is responsible for initialization of the service and the first synchronization after the node’s initial start and the latter is called when beacon node falls behind during the normal synchronization, and needs to resync using a more robust initial synchronization mechanism.

Another purpose of the service object is to be the glue between blocks queue and blocks processor: it makes sure that the queue is started and blocks received are forwarded to the processor.

Queue operates in the following manner:

Each FSM (see fsm.go:stateMachine) has the following data associated with it:

Start Slot: beginning of the range of blocks to pull into a given machine. The end slot is determined by the batch size, which is a predefined constant (currently 64).

Peer ID: identifies a peer that was used to fetch blocks into a given state machine; provided by fetcher via its output channel.

Blocks: fetched blocks; provided by the fetcher via its output channel.

FSM Manager is a container used to group machines together, for easier management and traversal. It is queue’s responsibility to make sure that Start Slot uniquely identifies the machine: there’s no point in having a machine with the same start slots, as machines are fetching batches of a constant size starting from the start slot, therefore machines with the same start slot will essentially fetch the same block range (albeit, possibly, from the different peers). Of course sometimes such a redundancy is unavoidable: in cases when the beacon node’s head cannot be advanced, machines with slots equal to that of some previously used machines can be spawned (see how machines are reset in onProcessSkippedEvent() event handler).

While event handlers operate on FSMs, they are not registered with machines themselves but with the queue, this is done for reasons of efficiency (machines are constantly removed and re-added, so are kept as simple as possible). When an event occurs (for example Tick event occurs every 200 milliseconds), each known FSM is passed to the corresponding event handler, depending on FSM’s current state. Here is the list of event handlers, required FSM start states and their corresponding handlers:

The above table is easy to read: for example it is easy to see that in order for an FSM to be passed to onDataReceivedEvent() handler, it must be in a Scheduled state and Data Received event must occur (that’s fetcher should write something into its output channel).

Below is a state transition table (depending on input there might be several possible transitions for a given event -- only one of which is valid, as our FSMs are deterministic):

When queue operates, FSMs are constantly being created and removed:

This is done to optimize the runtime and make code more simple to understand (had we decided to reuse the machines it would have required a lot of orchestration code - but right now, queue implementation is very simple and gets the job done).

So, whenever we need to implement some complex algorithm it almost always has to do with creating a new state machine of a particular configuration. For instance, see Handling Skipped Slots section and how finding the first non-skipped slot is implemented using a machine with a start slot set to some high future epoch.

Being able to algorithmically select a range of blocks (which will be reset if stuck, and if it gets blocks, those blocks will be eventually pushed into the queue and towards the block processors -- automatically) is one of the main benefits of using FSMs.

The fetcher component (see blocks_fetcher.go:blocksFetcher) is responsible for handling p2p communication, and does the actual data requesting and fetching. It is a very simple component operating in the following way:

Noteworthy code in the feature

There are several very interesting add-ons to the main synchronization procedure, making it more robust and useful. In this section, we will briefly cover them (feel free to dive into the code deeper -- it should be easy to follow).

Normally, there are no more than a handful of non-finalized epochs, and once initial synchronization is complete, the regular synchronization is capable of proceeding by obtaining new blocks, validating them, and applying fork-choice rule. But occasionally, the whole network is unable to reach consensus and forked branches start to occur, and can even get quite long. This is especially prevalent during test networks (see Medalla Incident post-mortem), where there’s no real ether at stake.

Regular synchronization cannot handle such fork branching, and node eventually falls behind the highest expected slot (if counting time slots from the genesis up to the current clock time). Once that happens, the system falls back to initial synchronization, which needs to be able to not only synchronize with the majority of known peers, but handle the case when that majority is dynamic i.e. be capable to backtrack from some unfavourable fork, which is no longer voted for by the current majority of known peers (while it was supported by previous majority just 10 minutes ago!).

Essentially, all we are doing is querying our peer list for peers with a non-finalized known slot higher than that which our node was able to progress to. Then, out of those peers, the peers list is randomized and they are queried to find a peer with blocks our node hasn’t as yet seen. Once such a peer is found, we need to backtrack (hence the name!) on that peer from the slot starting at our node’s head backwards in history until the common ancestor block is found (or until the predefined limit is reached, to avoid infinite/overly long loops). Once a common ancestor is found, node tries to build on top of that alternative fork. While seemingly trivial, this procedure has worked extremely well.

At each slot a block can be proposed. If this doesn’t happen, the block is considered as skipped. There might be lots of consecutive skipped blocks, but our queue has only 8 FSMs (so, can look no further than 8x64 = 512 blocks “into the future”). How do you overcome such a limitation, where the normal queue range of vision is 512 next slots, and the first non-skipped block is 10K+ slots away?

A simple trick is used: when all machines are in Skipped state, meaning we are stuck, the first 7 machines are reset normally (the first machine's starting slot is the current known head slot, the second machine is +64 slots, and so on, and so forth), but the last state machine is reset from a slot, possibly very far in future, where the first non-skipped block is found. So, if the last machine is set to start fetching within range where the next non-skipped block lives, then it will be able to fetch that block, and thus advance our node’s head slot. The only problem is finding that starting slot for this last FSM, and doing so efficiently i.e. without simply querying each and every slot up until we find a non-empty one (which can be 10K+ slots away).

We’ve devised an algorithm that is capable of looking ahead 50K+ slots (instead of only 512), and even further (for 50K we have unit tests proving the statement):

And the corresponding implementation can be found in blocks_fetcher_utils.go:nonSkippedSlotAfter, here it signature:

The procedure is quite optimized, for instance, within a single request, node samples 16 future epochs are at once (so the pace is 16x32=512 blocks/request, when looking for a non-skipped slot). Hence even non-skipped slots which are significantly in the futre are found very quickly.

Since we are dealing with a public decentralized network, we cannot assume that each peer behaves correctly, and there might be bogus, unresponsive, or even malicious peers.

In order to avoid being stuck with a single unresponsive peer, our first fetcher implementation shuffled peers before selecting one to fetch data from. We have improved upon this method and now score peers on their behaviour and increase the probability of selecting high scoring peers, thus utilizing our mesh more efficiently.

We have quite sophisticated scoring mechanisms already in place, and we’re continuingly building on them. Currently, the peer scorer service is able to track peer’s performance (on how many requests, how many useful blocks -- that’s blocks advancing the head -- have been returned). Peers scoring higher will have a better chance of being selected (see blocks_fetcher_peers.go for full code):

Not only do we filter by score, we also take into account the remaining capacity of a peer (capacity being the number of blocks left, before the rate limiter will be triggered and requests to the peer are blocked for a short period of time until capacity is restored).

Unit tests and mocks, how to write tests for the feature: Since initial synchronization interacts heavily with the P2P layer, we rely on mocks to simulate network mesh. The easiest way to start the test is to use initializeTestServices():

See, TestBlocksQueue_Loop() as an example of testing block syncing as a whole.

Now, you’re able to populate node’s chain with any blocks you need (including forked or skipped ones):

Since we have prepared (and customized) all the necessary mocks, time to setup queue and fetcher services:

For even better illustration on customized setups, please, see the following tests:

The --test_filter can be empty (all tests will then be run), or specify a pattern to match:

To run tests using vanilla Go, just use go test (to understand the reasons for passing the develop tag see our DEPENDENCIES):

When it comes to system and integration testing, generally one is expected to do it manually: run the beacon node and see whether it was able to sync from genesis to the latest head.

Variations include: stopping and restarting, stopping for a long time and then restarting, switching off access to the internet etc etc. Here is one way to do it: